NOPL’s Cicero Branch Adult Services Librarian, Sue Hansen, has discovered the magic of “coming of age” reads and also new authors. As the world’s people are coming out of their various isolation situations caused by the pandemic; it seems like a good time to read a book about rebirth and growth. Whether you’re a teenager growing into adulthood or an adult re-entering the world, Sue provides a list for anyone to enjoy. She finds her inspiration for this list by reading The Burning Girl by Claire Messud.

I enjoyed reading The Burning Girl by Claire Messud and finding a call for coming-of-age-themed titles by debut authors in 2020.  The Burning Girl is a spin on two early childhood friends, Julia and Cassie. They have shared everything, including their desire to escape the stifling limitations of their birthplace, the quiet town of Royston, Massachusetts.  Once they enter high school, their paths diverge, and Cassie sets out on a journey that will put her life in danger and shatter her oldest friendship.  I recommend the following titles in the coming of age theme from this year’s debut authors. 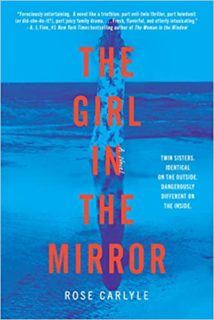 The Girl in the Mirror by Rose Carlyle
Twin sisters Iris and Summer are startlingly alike, but beyond what the eye can see lies a darkness that sets them apart.  Called to Thailand to help her sister sail the family yacht to Seychelles, Iris nurtures her secret hopes for what might happen on the journey. But when she unexpectedly finds herself alone in the middle of the Indian Ocean, everything changes. When she makes it to land, Iris allows herself to be swept up by Adam. Iris is one step closer to the hundred-million-dollar inheritance and her father’s good graces.

The Tea Chest by Heidi Chiavaroli
Hayley Ashworth dreams of being the first woman Navy Seal and comes across an unknown part of the Boston Tea Party’s history.  The Tea Chest contains documents putting her in the middle of a deep and dark secret shared with a past lover.  She learns the price of freedom in this day and age of mistrust and male dominance.

Miss Benson’s Beetle by Rachel Joyce
This story follows Miss Benson to New Caledonia in the Pacific to track down a golden beetle.  Every bit of a wild ride for Margery and her assistant Enid is also the dark postwar London backstory of Margery’s childhood.  This book has the feel of The Durrell’s of Corfu and The Signature of All Things by Elizabeth Gilbert; this is an excellent read if natural science is your thing.

A Wild Winter Swan by Gregory McGuire
Laura lives on the Upper Eastside of Manhattan, in a lonely townhouse she shares with her old-world grandparents following her brother’s death and her mother’s breakdown.  The awkward teenager has been getting into trouble at home and has been expelled from her high school.  Laura may find herself at boarding school in Montreal. Nearly unmoored from reality through her panic and submerged grief, Laura is startled when a handsome swan boy lands on her roof.  Laura’s struggle to find help for her new friend mirrors her troubled past.

Far From Normal by Becky Wallace
Maddie McPherson, AKA CalaMaddie is once again in the shadow of a megalomaniac soccer star.  A marketing job once brings excitement to her future, but she has been duped Maddie in the middle of a social media storm.  Falling for the footballer, she may botch her career with a dream job at the sports marketing firm unless her fortitude to find her place in the world persists.

Memorial: A Novel by Bryan Washington
Open to interpretation, is the itinerary of two reluctant room-mates take in delicious meals in their one-bedroom apartment.  Mike and his partner, Benson share Mike’s mother in a way that opens their relations over time.  As the couple drifts apart, their bond is up for question to the reader.

Brass: a Novel by Aliu Xhenet

A waitress at the Betsy Ross Diner, Elsie hopes her nickel-and-dime tips will add up to a new life. Then she meets Bashkim, a line cook in Waterbury, Connecticut. Back when the brass mills were still open, this bustling factory town attracted waves of immigrants.  Elsie, herself the granddaughter of Lithuanian immigrants, falls in love quickly, but when she learns that she’s pregnant, Elsie can’t help wondering where Bashkim’s heart lies.  Seventeen years later, Elsie’s daughter, Luljeta, decides to find out what her mother has been hiding about the father she never knew.

White Ivy by Susie Yang
Young Ivy’s inchoate shop-lifting for finer things earns her a one-way ticket to China.  She leaves behind her dysfunctional family, school chum Gideon and her place in his upper-class circle.  Ivy matures into a poised, restless young woman who meets up in the same path she left as a teen now in Boston, where she bumps into Sylvia Speyer, Gideon’s sister.

Concluding in 2021, I recommend these last four titles:

Mrs. Dickens and His Carol by Samantha Silva

A Lover’s Discourse:  A Novel by Xiaolu

These Ghosts are Family:  A Novel by Maisy Card