I don’t know about you, but I am utterly useless during the days between Christmas and New Year’s. Instead of returning to my routine, I find myself still eating Christmas cookies for breakfast and wearing pajamas all day. Well, it turns out this is the perfect week for bingeing! Not just on the leftover holiday food, but on my favorite movies and TV shows.

Streaming services used to be the only possible way to binge-watch programming, however not everyone has access to these services, so our Brewerton and North Syracuse libraries have found a solution- Binge Boxes!

A Binge Box includes four to six movies in one DVD case centered around a theme, taking the guesswork out of what to watch next. If you’d like to take one out, all you need to do is place the items on hold. Each box can be renewed up to two times, giving you all the time you need to finish each movie. However, if you are someone who genuinely wants to binge, the week-long loan period should be more than enough.

I have listed many of the boxes located within the NOPL collection, as of today, at the bottom of this post; however, I would like to recommend some Binge Boxes that I think are particularly binge-worthy. 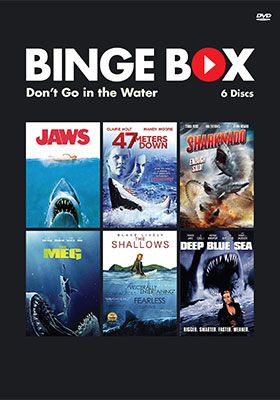 My first recommendation is Don’t Go In the Water. This Binge Box contains six movies that might make one a little wary of the water during your next beach vacation. Consisting of Jaws (1975), 47 Meters Down (2017), The Meg (2018), The Shallows (2016), and Deep Blue Sea (1999), this Binge Box will be sure to get your adrenaline pumping while you wait for the next shark attack. To me, the stand-out hits of this box are, of course, Jaws and The Shallows. You can never go wrong with Steven Spielberg’s classic masterpiece, Jaws;  although made decades ago, the performances and, most importantly, the Oscar-winning score will leave you on the edge of your seat. The Shallows starring Blake Lively is a classic example of a modern shark movie with a protagonist who makes smart and semi-realistic decisions as she fights to survive. Although these two movies are my favorites, all of the other films in this Binge Box are excellent and will make for a perfect binge.

Another great Binge Box to check out is 80’s Imagine Movies. This box is filled with all of the best and most unique movies of the 1980s. Containing films like The Goonies (1985) and Ghostbusters (1984), this bundle showcases a time where movies were made not because they were profitable but instead because a director had a vision they wanted to bring to life, no matter how outlandish that vision might be. My personal favorite from this box is Beetlejuice (1988). Starring well-known names such as Alec Baldwin, Geena Davis, and Michael Keaton; Beetlejuice transports you to a world where you should be more afraid of the living than the dead. Keaton’s iconic performance accompanied by the practical visual effects, world-building, and slightly inappropriate humor that are all undeniable 80s, still hold up today. Fun fact for you: after the success of the first movie, a sequel “Beetlejuice Goes Hawaiian”  was proposed but never made and is still in pre-production to this day. Other films included in this Binge Box include The Dark Crystal (1982), Weird Science (1985), and Labyrinth (1986).

If you’re looking for something more serious, might I recommend The Many Noms of Meryl Streep. This box contains four movies, each anchored by an award-nominated Meryl Streep. With this box, you can witness how well Meryl Streep can transform from one role to the next, making it easy to see why her acting is almost always considered award-worthy. Consisting of The Post (2017), The Bridges of Madison County (1995), August: Osage County, and The Iron Lady (2011), I can’t possibly pick out my favorite from this bunch, as each movie is fantastic and worth a viewing. 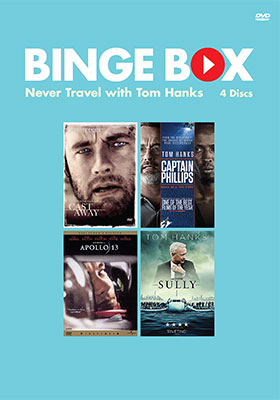 Speaking of Meryl Streep, her costar in The Post, Tom Hanks, has his own Binge Box dedicated to all of the travel misadventures that seem to surround the characters he plays. The Binge Box entitled Never Travel With Tom Hanks contains Cast Away (2000), Captain Phillips (2013), Apollo 13 (1995), and Sully (2016). Like with Meryl Streep’s Binge Box, I would recommend every Tom Hanks movie included in this set. However, both Apollo 13 and Sully stand-out to me as being some of Hanks’ best work. Interestingly, both films are based on actual events and will be sure to resonate with you. Tom Hank’s charm and charisma never gets old, even if you are binging four movies in a row.

These recommendations are just a few of the Binge Boxes that NOPL has to offer. Below, I have listed a few more Binge Boxes, and even more have been added already. If you would like to check out any of these titles, visit our Unusual items page or search the catalog for “Binge Box” and place a hold on your favorite ones. Requests are also available by phone.

View a list of Binge Boxes below or visit the catalog now to view them all.  Use the catalog’s location filter to see NOPL’s Bing Boxes – you’ll get those faster!

Don’t Go in the Water

Don’t Think a Flu Shot Will Cut It

A Person’s A Person No Matter How Small

The Many Noms of Meryl Streep