The Modern Library is an over one-hundred-year-old publisher best known for publishing influential experimental writers that have changed American culture for the better part of a century. Here we take a look at Adult Service’s Librarian Terry Morris’ personal collection of Modern Library books and memorabilia while getting a brief glimpse at the history of various publishing mediums and cover art. We begin with a Q&A with Terry.

When did you start collecting Modern Library books?

I found an old Modern Library book in a neighborhood yard sale around 1995 in Buffalo, NY. I asked the lady, whose sale it was, if she had any books. She told me to go to the third floor of her house, and there was a table with some titles on it. They were all Modern Library titles.  I was unfamiliar with them but thought they looked cool, so I bought the William Faulkner title, Sanctuary.

After purchasing the Faulkner book, it turns out that the lady having that yard sale was a bookseller, and a few years later, I went to library school with her daughter.

Are there any books or items in your collection that are important to you?

Where do you find these books?

I mostly find these books at library sales, and I had found a good number of them at the Liverpool Public Library Book Sale and libraries across the country. When I was in sales and traveled all over, I found a ton of them.

Do you need a particular place, or a unique climate to store these books? Where do they sit in your home?

I should climate control my basement, which is where my home library is. The previous owner was an SU professor, and he converted a good portion of the basement into floor-to-ceiling bookcases. My collection sits on those shelves, and on occasion, I will add a bookcase. I have my late mother’s oriental rug down there, a nice Stickley Morris chair, and a working fireplace. It’s pretty cool as far as basement libraries go.

The Modern Library was an idea that Albert Boni came up with when working with business partner Horace Liveright at Boni & Liveright Publishing. However, the roots of the idea came from an earlier publishing endeavor that Albert Boni had with this brother Charles Boni, when the two ran a book shop that was very popular with New York’s bohemian crowd. They published the Little Leather Library, inexpensive reprints of classic titles; this was what the Modern Library would be as well, but better.

Boni’s idea behind the Modern Library was to provide well-made reprints of the classics at very low prices. The Modern Library series cost $. 60 cents while other publishers were charging $1.00 or more for the same reprinted titles. The first title in the series was Oscar Wilde’s The Picture of Dorian Grey. The typographical dust jackets covered a flexible leather-like binding (leatherette as it is known). In fact, a lot of people think that these earlier titles never had jackets. They did, but unfortunately, they were very flimsy; few have survived. Handsome copies of these early Modern Library books in their original dust jackets go for pricey premiums.

Over the years of the first run of the Modern Library 1917-1970, there were many changes to the titles in the series and the jacket designs and bindings.  There were fourteen different types of bindings and fifteen different styles of jackets during this time, not including the one-off variants.

As an extra income source, Liveright would lease the printing plates for the modern library titles to various organizations who would then print very similar-looking titles for their own purposes, mostly to give away to organization members. While these titles are rare, they aren’t very valuable.

The Modern Library continued until the 1970s when Random House discontinued the series only to start it up again in 1980.  The 1980’s series is notable for its bland text dust-jackets, which eventually grew into more illustrated and slightly more interesting woodcuts. The woodcuts did not last long, and for the second time, the Modern Library ceased publication. Sometime in the 2000s, Random House attempted to revive the imprint again. This time the thought process behind the dust jackets was minimal. The art of the jackets were completely irrelevant as it did not correlate to the book.

Adult Services Librarian Terry Morris presents his collection below. Older bindings and jacket styles are located at the top of the bookshelf and work down to more recent publications. 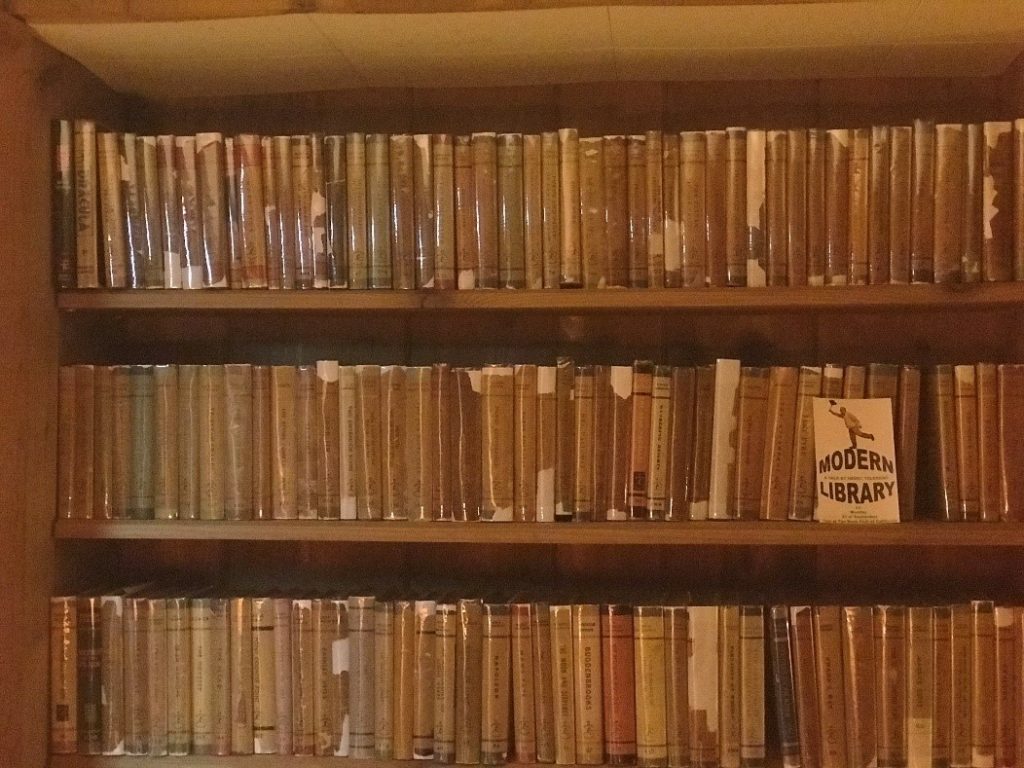 At the top are Morris’s older titles, and the postcard to the right is a promotion piece from the “father” of modern library collecting Henry Toledano, for his talk in San Francisco in 2002. 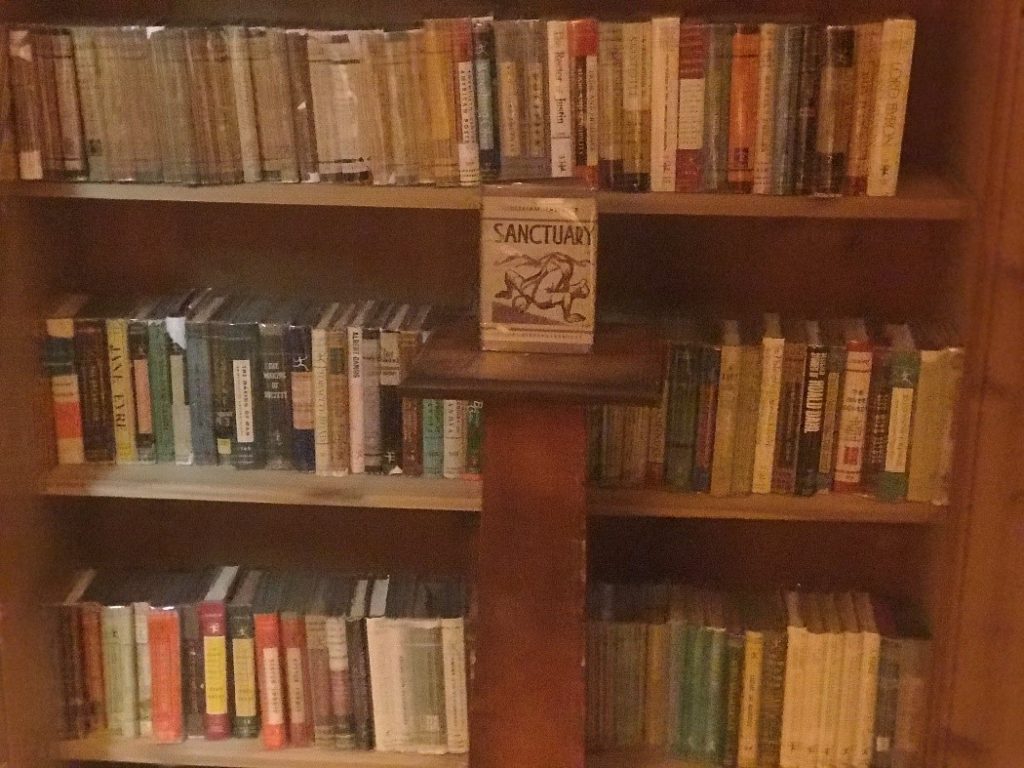 Here is the bottom half of that bookshelf, including the first flexible binding Morris added to his collection William Faulkner’s Sanctuary. 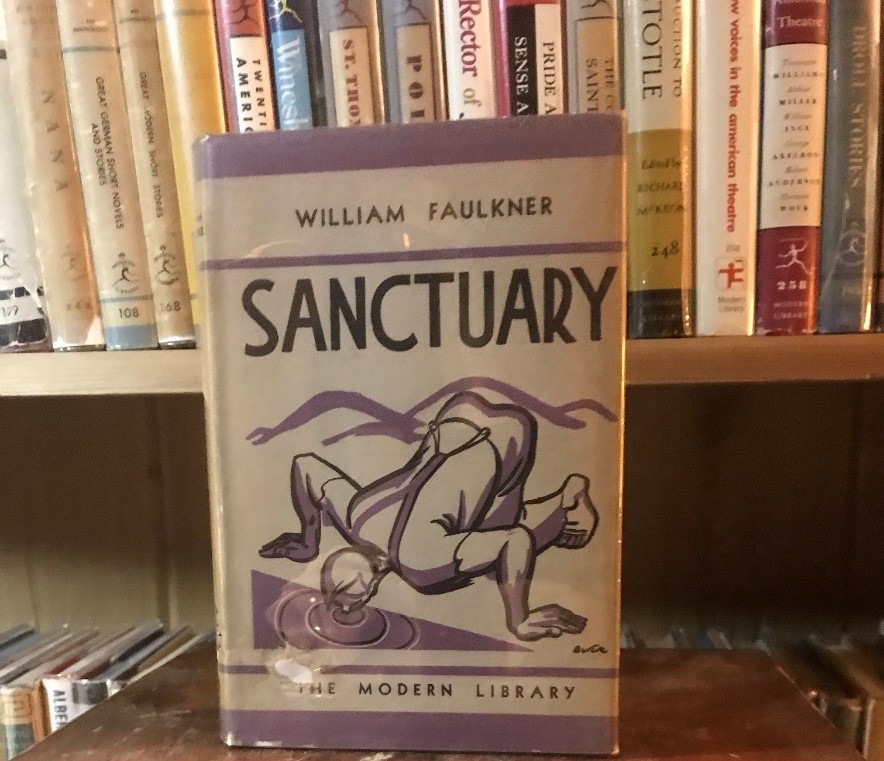 Shown are the initial text-only dust-jackets from Modern Library. 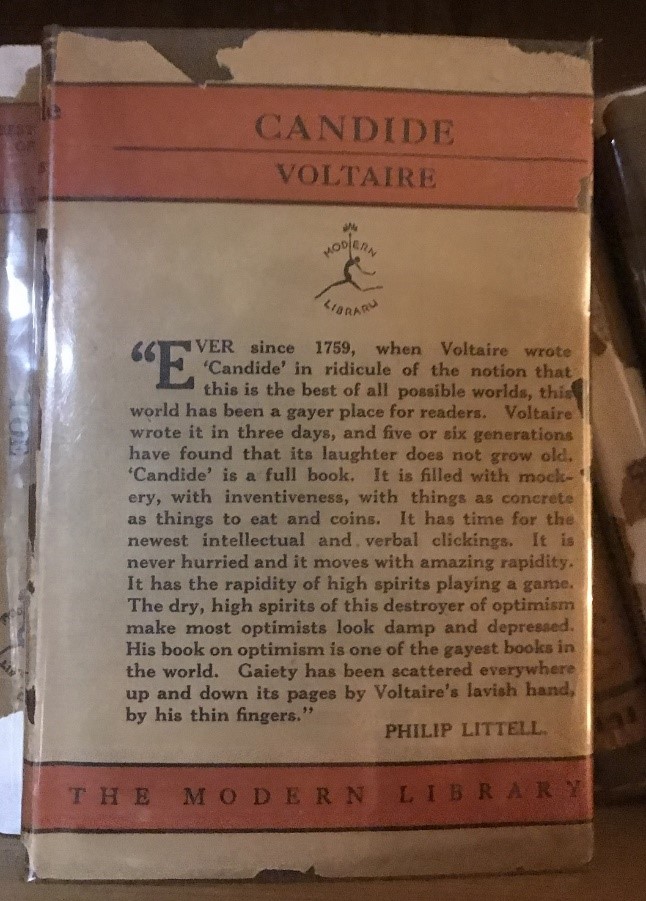 Voltaire’s Candide was the first title that Random House ever published. 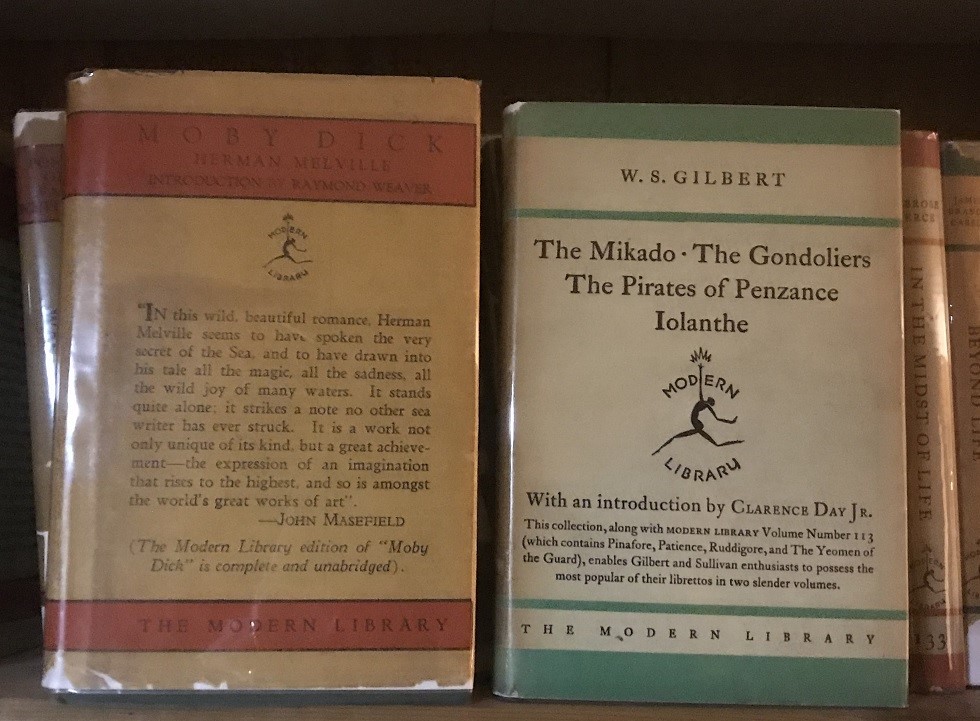 Within the decade from 1920 to 1929, many jackets were reformatted using many of the same text elements. See the difference above. Going forward the title of the book and the logo became much more prevalent. These illustrated jackets started to appear more commonly in 1928 as limited print gift sets. The illustrated jackets stuck until the end of the first run. Below are some of Morris’s favorites. 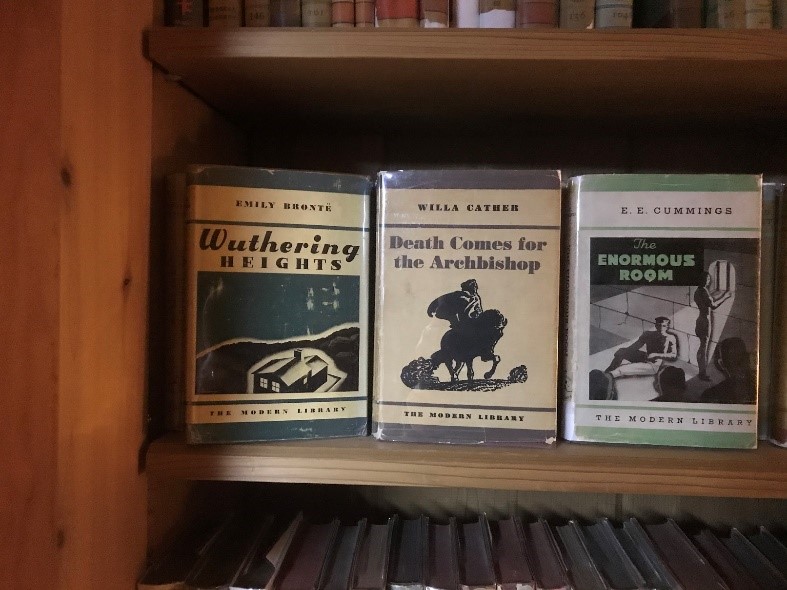 The illustrated jackets started to appear more commonly in 1928 as limited print gift sets. The art work of these jackets not only stayed with the titles until the end of the first publishing run, 1917-1970, but the artwork is collectible. Below are some of Morris’s favorites. 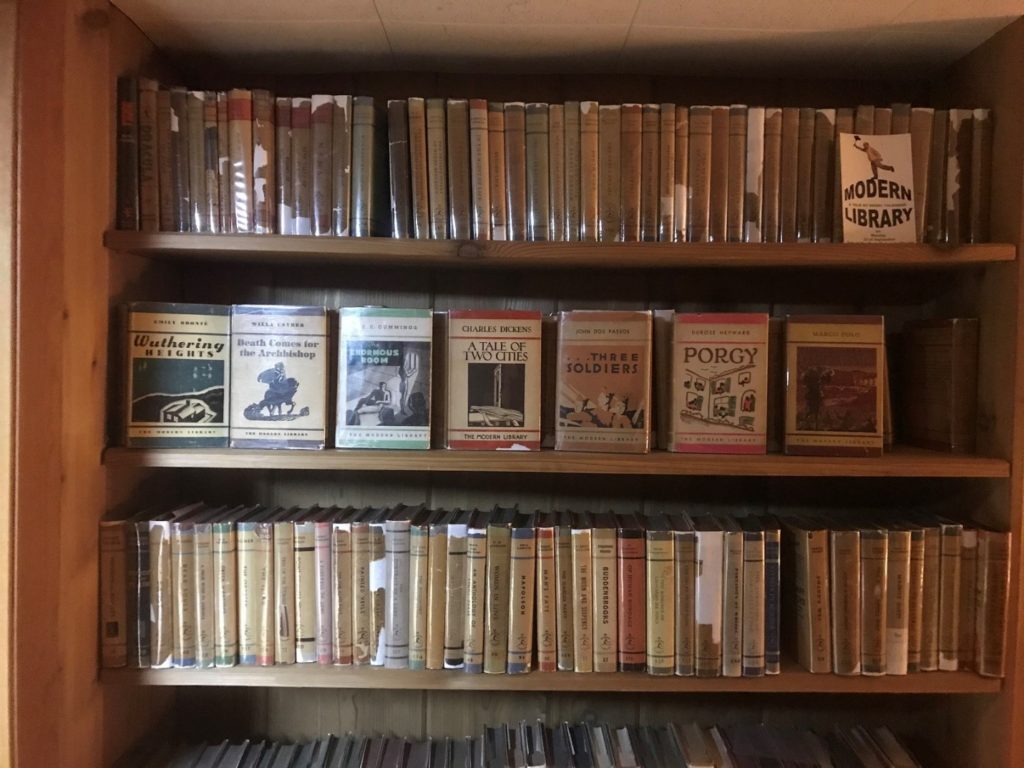 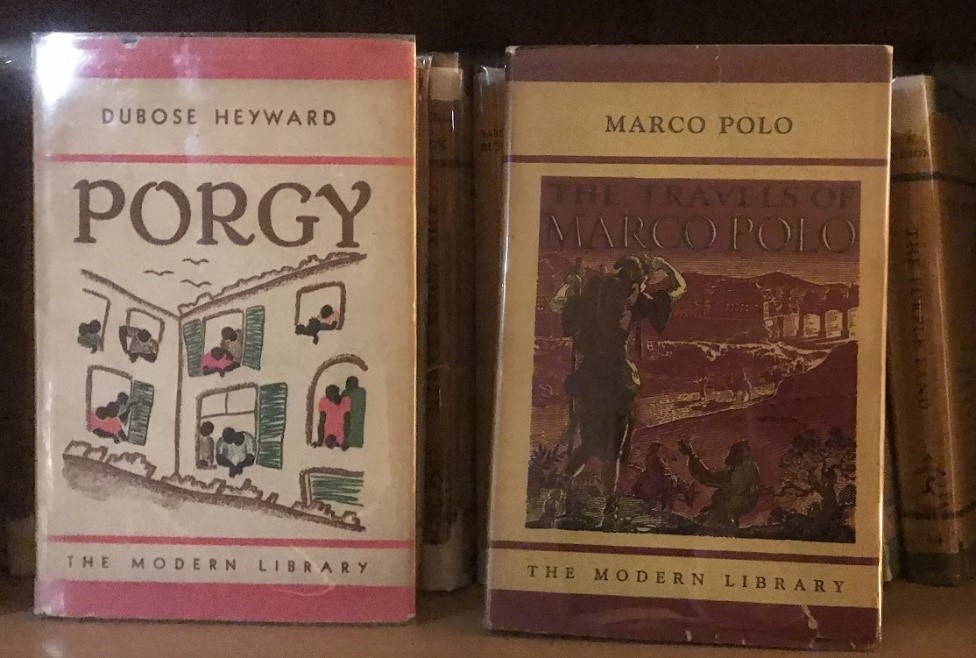 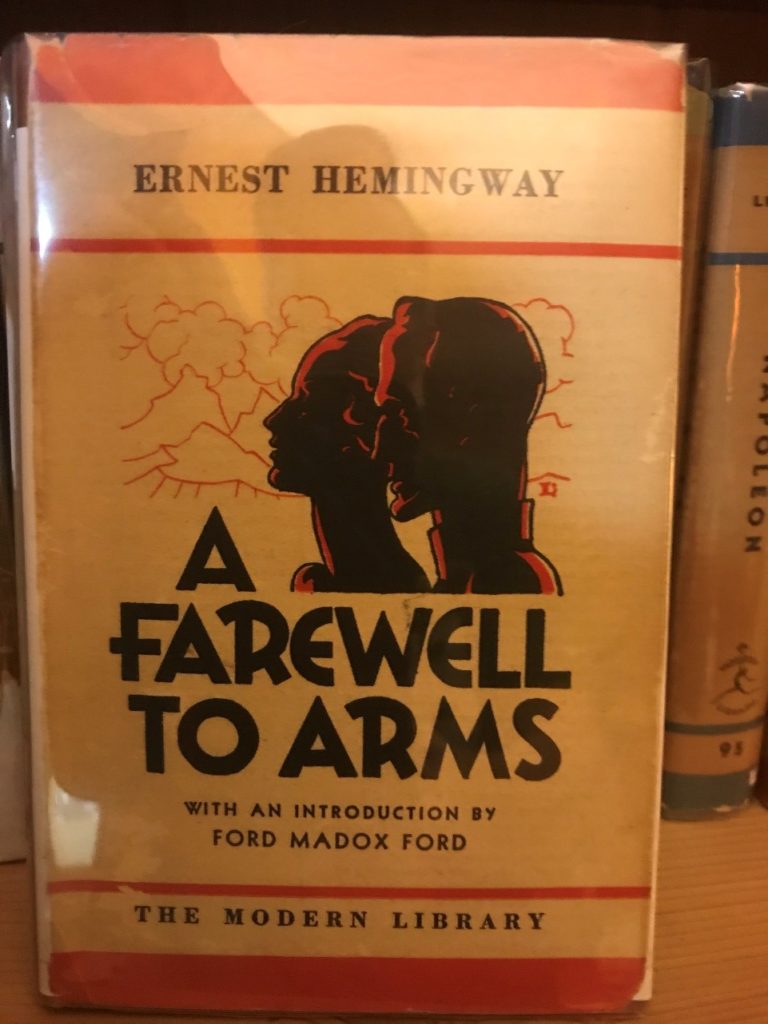 Ernest Hemingway’s “A Farewell to Arms” is one of Morris’s prized possessions.

After World War II, the jackets were redesigned again, taking into account graphic design, combining imagery and text to carry out an idea. For Morris, this is some of the best-illustrated covers he’s ever seen. 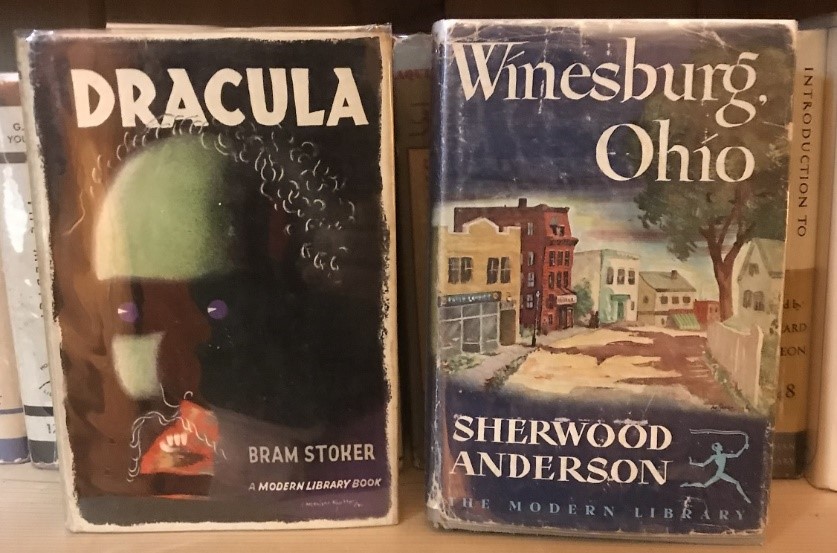 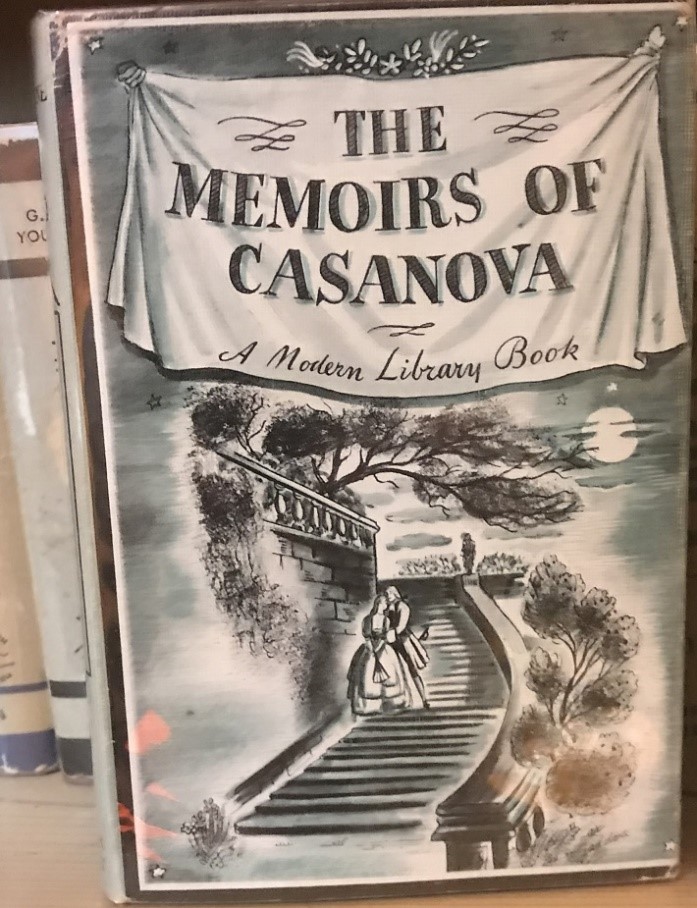 This title is not necessarily rare, but it is one that every collector must-have. The jacket is made from linen instead of paper.

Here are some titles Morris sees as spectacular. 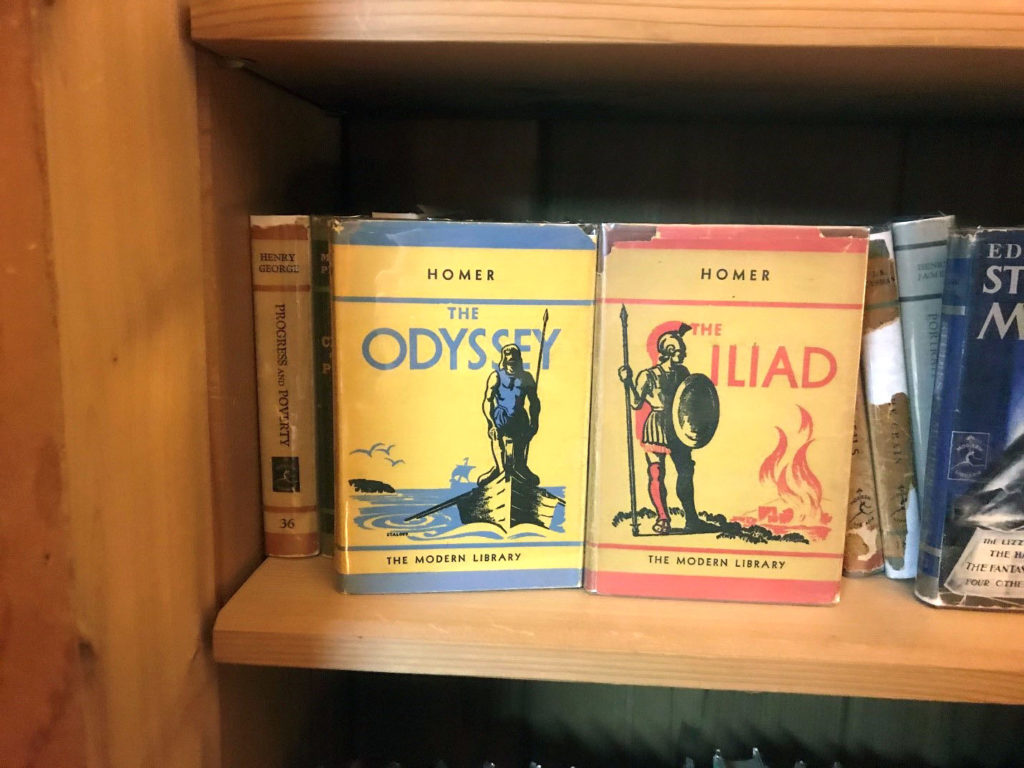 Not all reprints are highly valuable. There are two maybe three titles that are worth more than $500, such as The Great Gatsby and Alice in Wonderland with the cover designed by Salvador Dali. This later title is so rare there are some collectors who do not believe it exists.

Below is one of the gift sets referred to earlier. This is commonly called the Kertol binding. Compare the binding of these titles to the traditional binding that was in use by the Modern Library. 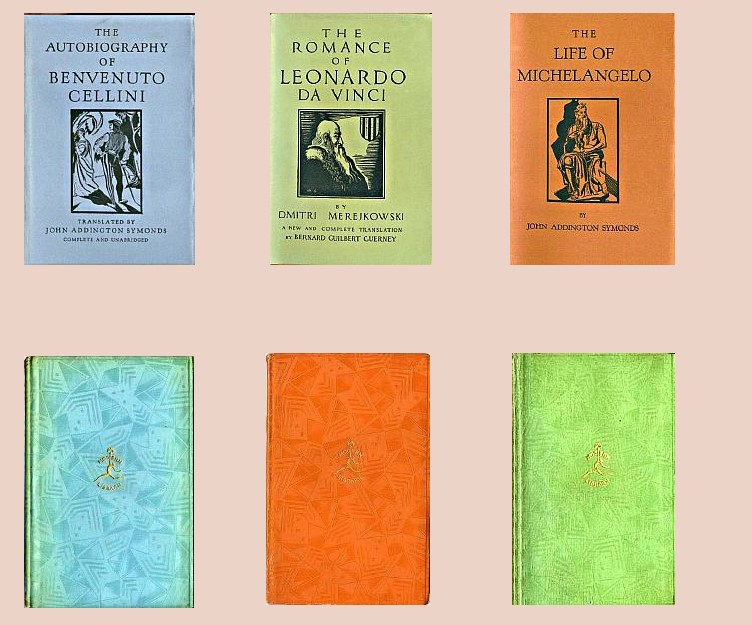 There are 14 different types of bindings for the Modern Library, not including the gift set bindings.

Each binding type somewhat corresponds with an era.  In addition to using various binding methods, new stronger materials were used for book cover manufacturing as standard binding would not hold up in some use, typically schools and libraries. Buckram, a stiff cotton fabric like muslin, was used to make sturdier books that were bound without a dust jacket and primarily sold to schools and libraries, like the example below. 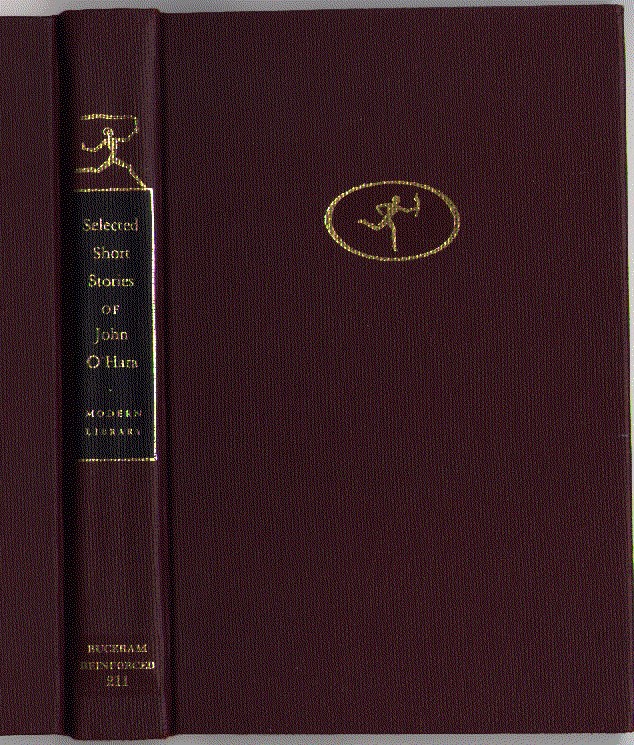 Buckrams were first introduced in 1928 but did not sell well, Random House tried again in the 1960s, and they had a much better reception. Also in the 1950s and ’60s Modern Library introduced the College Editions which were paperbacks. I personally do not collect those but a lot of folks do.

In addition to the various editions of the Modern Library, a collector is on the hunt for several ancillary items, such as Modern Library promotional pieces;  below are in-store posters. 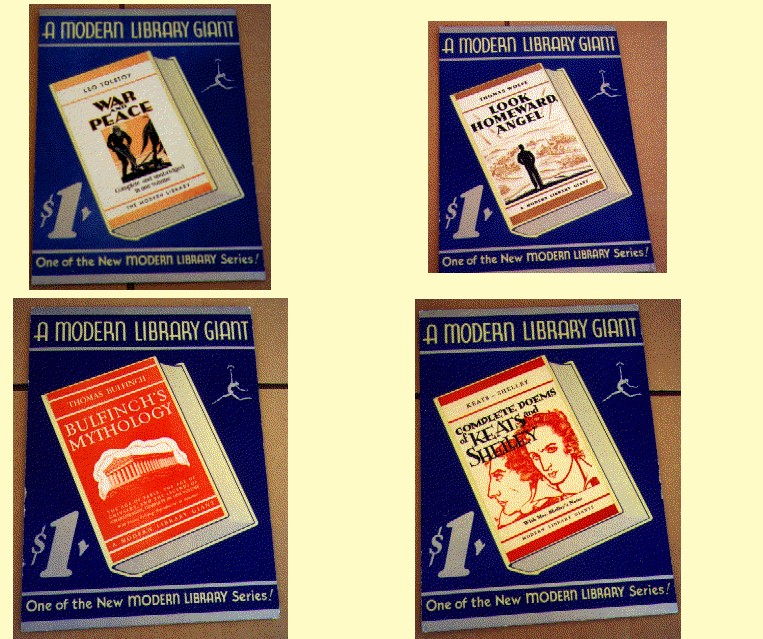 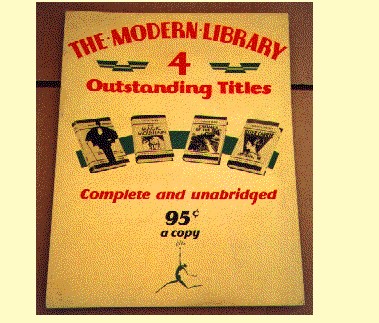 These are for the Modern Library giant editions. 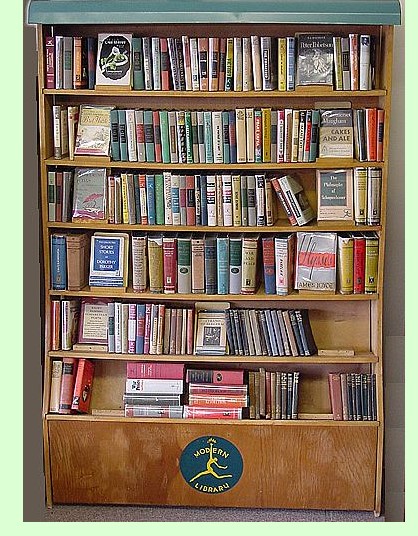 In addition to the posters, Modern Library also offered bookcases for display purposes.

When smoking was in favor, the Modern Library made matchbooks; this is from Morris’s collection.

The rarest piece Morris has ever found is a letter from Modern Library owner Donald Klopfer to an academic outside of Buffalo, NY; the Professor requested a new title sheet with the complete title, and Mr. Klopfer sent it to him. Apparently, Modern Library published a book using its short form title, and not its generally accepted title. 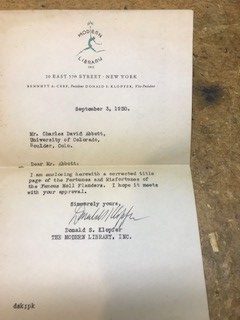 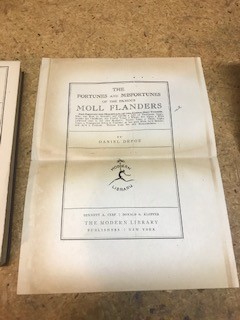 The Modern Library published Moll Flanders but didn’t use the full title which is,

The Fortunes and Misfortunes of the Famous Moll Flanders. Who was Born in Newgate, and during a Life of continu’d Variety for Threescore Years, besides her Childhood, was Twelve Year a Whore, five times a Wife (whereof once to her own Brother), Twelve Year a Thief, Eight Year a Transported Felon in Virginia, at last grew Rich, liv’d Honest, and dies a Penitent. Written from her own Memorandums . . .

There is much to know about the Modern Library. As an example; on the reverse of the modern library dust jackets are the titles published in the Modern library 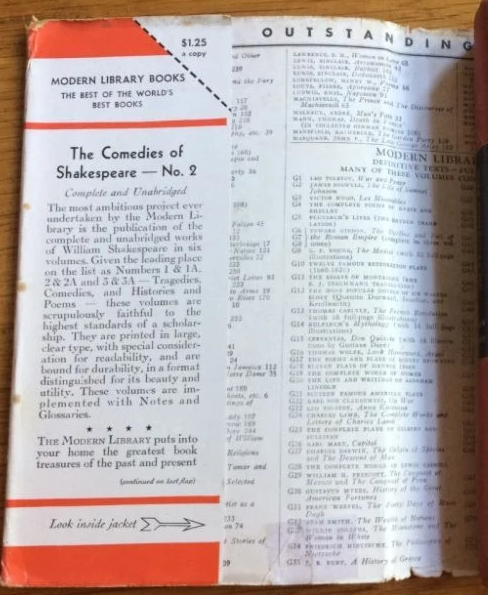 Each title has its own number on the spine of the book. 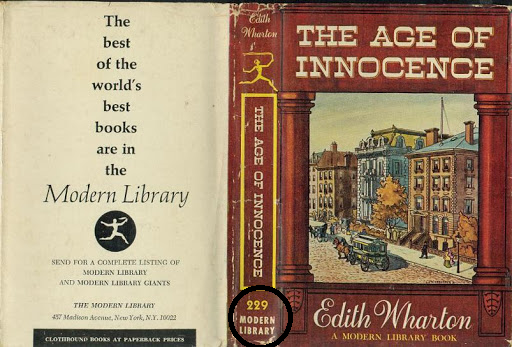 The number can be reused as titles are dropped from the catalog.

In addition to the standard editions, there are Giants, illustrated editions, college editions in paperback; the list is seemingly endless. There are also reference materials and biographies of Horace Liveright that a serious collector would want to buy. In short, the Modern Library is something many are fascinated with.

About the Author: Terry Morris